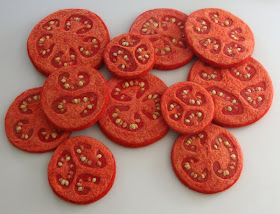 Last week was nothing short of hot in Bloomington, so I knew it was clearly time for tomatoes. The little red fruits just filled my world. I poked and created slice after slice of juicy summertime heaven at every meeting and event I attended, and all day when the boys were in school. My payoff, sadly, wasn’t a fresh tomato sandwich. It was even better! I finished off the last of the tomatoes, and indeed the last of my vegetables, for my ‘Ratatouille’ piece! I can’t tell you how good that feels after months of 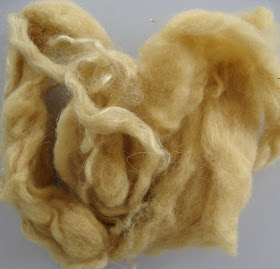 felting giant carrots, onions, and beets (for the Summer Harvest companion piece) followed by eggplant, onions, herbs, zucchinis and tomatoes for the Ratatouille piece. What a giant relief to have all the pieces (and backgrounds) in my art studio.
My week in tomato town started with buying and slicing open a selection of Roma tomatoes as models. Most artists can’t get away with slicing open their models to get a look at the internal structures, but happily I can. What struck me when I examined the tomatoes was how variable the tomatoes are with respect to the internal chambers. I assumed they would all have the same developmental program that produced the same chamber structure. Then to make the seeds I was looking for some muted earthy yellow color. Fortunately, I came across fleece that I had dyed this summer with goldenrod flowers collected in Michigan. I did one batch with just the flowers and a second with alum added. The former gave a more muted yellow that was perfect for my seeds. I’m always delighted when something I can’t imagine finding a home for turns out to be just the right color for a future project. I needle felted the seeds in place after the tomato slice took shape, then I gave them a light blanket of the slimy tomato chamber material and then felted more seeds on top. 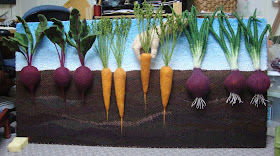 I felt the technique gave a sense of depth to the seeds within the seed chamber that I really liked.
Of course finishing the components means it’s time to assemble components onto the weaving background. I stayed up fairly late last night, enjoying the cool of the basement art studio over the stuffy upstairs bedrooms after an eighty-degree day. I decided to put together ‘Summer 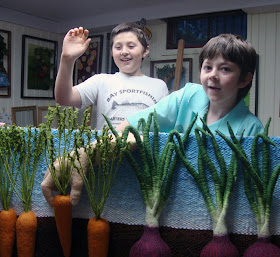 Harvest’ first. I really like it! I just feels soooo good to have it assembled after months of creating small pieces and working through the doubt of whether it will all work out. I even found a use for the orange thread from Jim’s youth, which he used to tie spawn bags to catch trout. Everything finds a use in my house! As the piece came together we broke out a bottle of wine to celebrate. Now I just need to decide on the exact component layout for ‘Ratatouille’ and assemble that piece.
Everything else in my world took a back seat to art last week, but I did get out a little. The opening reception for “The Art of Re-Use” in celebration of Earth Day in Columbus, IN organized by Marilyn Brackney, was Thursday evening at Hotel Indigo. I left all three boys home and drove over with Cappi Phillips. The trip seemed like it only took ten minutes because 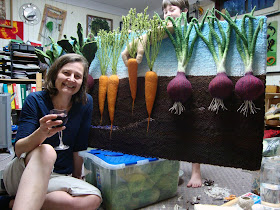 we laughed and giggled just about the whole way. The reception was well attended, and I even ran into one of the judges from the first Déjà Vu show. She also happened to have bought a Winter Birches piece. Now she’s doing amazing encaustic pieces. I’ve been oohing and aahhing over the technique ever since we saw a demonstration of the art form at Wonderlab.

Over the weekend the whole crew went out to the African American Dance Company’s spring performance, which was excellent. I loved seeing such immense talent in all the different body shapes and ethnic backgrounds. Some of the movements seemed almost snake-like to me, which got into my head. I tried 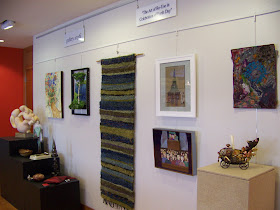 to think and move like a snake when I was doing Zumba the next day. We also managed to get out to the Sunday matinee performance of Miles Away at the Bloomington Playwrights Project – a date with hubby! The acting was intense and at the end I just sat in sort of a stunned silence for a bit to pull myself back into my own reality. The characters and plot were far removed from what I experience day-to-day, but I felt completely embraced in the experience because of the incredible acting. Thanks to Chad for assembling an amazing out of body experience. Go see it!
This will be another big week—completing ‘Ratatouille’ will certainly be an early major project. I’m a little nervous about it still, but I’m optimistic about the final product. I also noticed, ahem, that our rhubarb was starting to poke up in the garden. Hmmm, let’s see…spring, rhubarb…could a pie be far behind? Check back next week!